A full revision cycle has begun on the seven parts of the EN 45545 set of standards, which covers the various aspects of fire safety in the rail sector. Standardisation work is currently being conducted by operators, manufacturers, suppliers and laboratories, grouped under the umbrella of France’s office for railway standardisation (BNF).

The LEM fire testing team, which performs the bulk of tests qualifying the fire behaviour of materials in compliance with Standard EN 45545-2, is actively involved in this revision work. The objective is to share our expertise and build, together with all stakeholders, our regulatory framework for tomorrow.

The changes to Standard EN 45545-2 are envisaged in two phases:

– Phase 1 involves an editorial revision, with a first draft of technical changes already anticipated during the past few years of the standard’s application.

– Phase 2 will address the technical issues that require further discussion at European level.

The standard saw a first revision in August 2020 to its French version. Both this version and the previous one (2015 amended version) are usable. However, the version referenced by the European regulations (the Loc&Pas TSI) remains the 2015 version.

Included in the amendments to the standard are the addition of new requirements and some supplements in the general points, which are mainly intended to simplify the studies based on the product flowchart. However, the main change comes in the conversion of test annexes into standards in their own right: the test for a complete seat (former Annexes A and B become EN 16989), and the measurement of smoke toxicity in a smoke chamber (former Annex C becomes EN 17084).

These new standards involve different measuring methods, implying an eventual need to study the transition for products affected, from one standard to another. With this in mind, the LEM obtained an extension of its COFRAC accreditation to conduct fire tests in compliance with EN 17084.

The LEM also actively contributes via its involvement in the EUROLAB association, studying the practical impact of introducing this testing standard in French laboratories.

The LEM’s involvement and foresight in respect of these regulatory changes enables it to provide close support for its customers and understand their product positioning.

As a major player in the urban light rail sector and for many years a provider of fire behaviour testing, the LEM is able to guarantee its customers a high level of expertise. 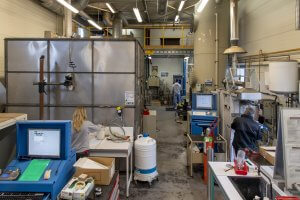