The Aquascan device developped by the AEF, Eurailtest's partner

Phased array ultrasonic technologies are prompting major breakthroughs in industrial non-destructive testing (NDT). They have now reached the maturity enabling them to be used for increasing numbers of industrial applications, substantially reducing inspection times and vastly improving NDT performance, in particular in terms of detection probabilities and levels of expertise.

These technologies are now widely employed in railway circles, either for daily component inspections in the Technicentres during maintenance operations or for laboratory purposes: product type approval, master part qualification, fault analysis, etc.

Aquascan is a device designed and patented by SNCF for use in wheel inspections. It is based on phased array technology and is the brainchild of our partner laboratory AEF (Railway Test Agency). Initially developed for use in maintenance applications, it has also proved highly efficient for wheel defect examination and analysis. 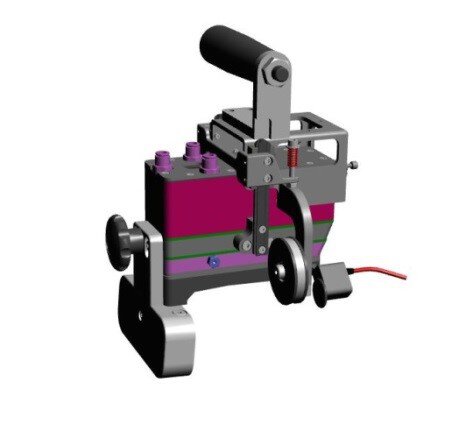 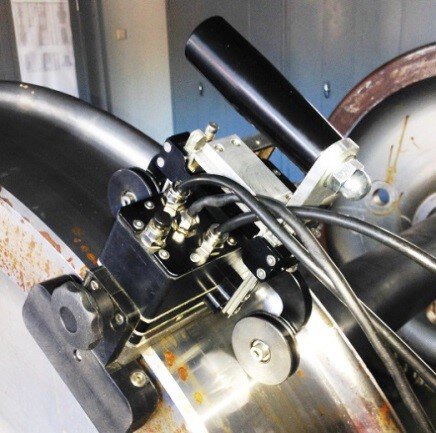 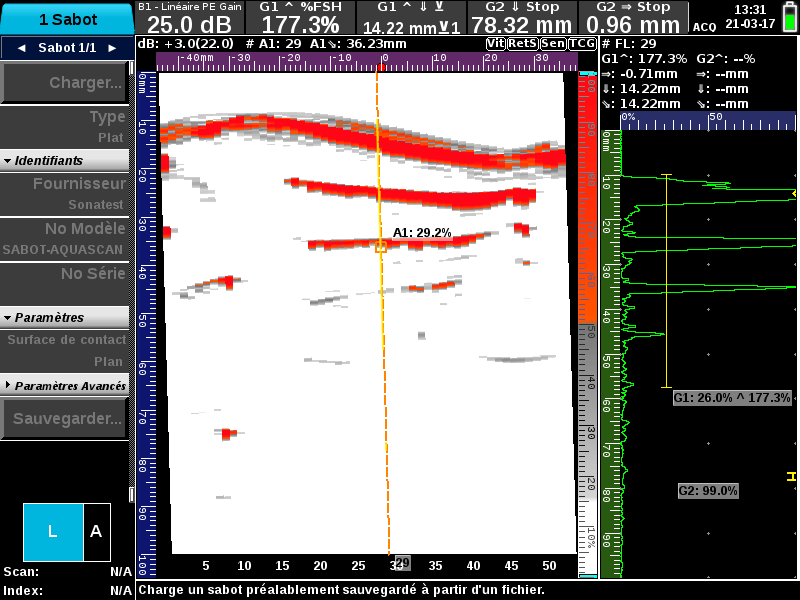 The phased array ultrasonic technology used here (local immersion with a water pocket as coupling medium) produces a cross-sectional view of the wheel rim below the position of the transducer.

At the top of the screenshot it is possible to make out the wheel profile at the top with, from left to right: counter-slope, tread, wheel flange fillet radius. This profile corresponds to the interface echo, i.e. where the ultrasounds enter the part under inspection.

Below this is, therefore, the area to be inspected, namely the volume of the wheel rim.

Internal defects, such as fatigue cracks, will then appear as red blobs more or less parallel to the tread, which may, as in the example shown below, show repetitions (echo repetition).

Laboratory analyses were recently conducted for Eurailtest with Aquascan on a problem of recurrent cracking at the interface between the tyre and the centre of a certain type of wheel. The root cause is most probably a design fault since the phenomenon is identical from one wheel to the next: position and characteristics of the cracks, etc.

It was, therefore, necessary to find suitable equipment to check the state of the wheels without having to embark on complicated maintenance operations such as removing, releasing or displacing the wheel or even striping its paintwork, all of which would require a trip to the maintenance depot. More conventional non-destructive methods (NDT) such as magnetic particle or dye penetrant testing were rejected, since they require fully stripped surface conditions.

Feasibility tests with Aquascan took place in July 2017 at AEF. Ultrasonic testing parameters were adapted to cater to the specific issue of crack detection beyond the volume of the tyre at the point where it interfaces with the wheel centre at about 80 mm from the tread. A wider angle was, for example, used to zoom in on the critical area for improved crack detection, whence the resulting slightly deformed image on the screen. 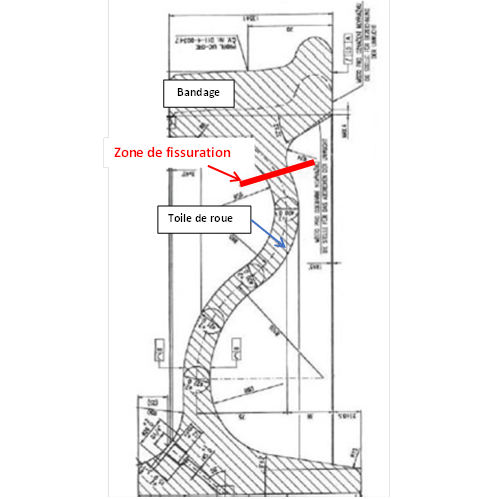 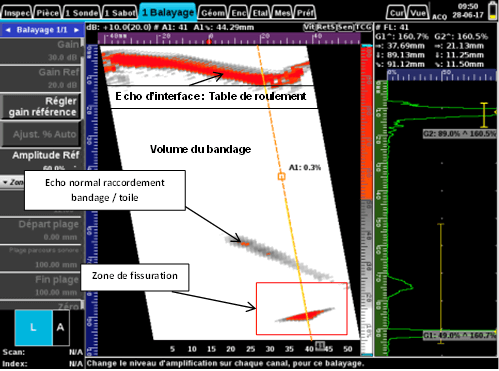 Inspections are simple provided that suitable wheel rotators are available. The degree of sensitivity can be adjusted to set the part rejection threshold. This technique is ideal for resolving the problem at issue, namely the need to make a rapid diagnosis without having to dismantle or strip the wheel. It can be used to detect cracks of about 5 cm, with accuracy and without false alarms.

Aquascan is highly reliable in detecting wheel defects. It is simple and convenient to handle and the data on the screen easy to interpret, much to the appreciation of its operators. The width of tread covered by the transducer increases defect detection probability. It takes less than 20 seconds to complete the inspection process for a single turn of the wheel. The system is also economically and environmentally advantageous in that the only coupling medium used is water compared with conventional ultrasonic testing techniques requiring the use of gels. Aquascan is an exciting new wheel inspection solution, for all types of problem: