One of the major challenges facing railways at the present time is that of reducing atmospheric pollution in underground installations. When trains are operated underground, a specific form of pollution occurs, which is the result of the fine particles released by moving vehicles and the enormous difficulty of eliminating them in enclosed spaces.

Knowing the sources of these particles is one thing but it is another to establish their effects on health and find ways of reducing their levels of concentration. 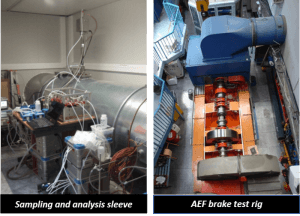 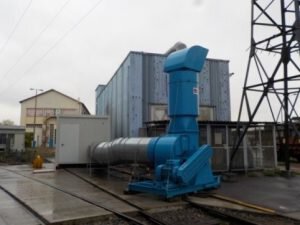 The air flow system fitted on the test rig collects the dust released during brake application and channels it into a sleeve where samples can be taken for analysis.

In addition to these tests on the air in underground installations, other types of research may be conducted to establish the criteria for selecting braking systems or for producing new longer-term system design specifications.

Similar tests may also be carried out to verify the impact of braking characteristics (successive applications, brake force, etc.) to find the least polluting solution.

Data can then be stored for use in developing digital models for simulating particle dispersion.

Air quality represents an important issue, especially when it comes to the quality of work life. Eurailtest, with its partner laboratories, AEF and LEM are able to provide tests regarding this matter.