For trains to run safely and to time, their sliding doors have to be constantly maintained in good working order.

This entails maintenance operations to replace parts that have become worn under repeated service loads.

Door track systems represent a specific example of where wear tests can usefully be performed.

With these systems, the door panels are fitted with catches which come into contact with the counterparts on the vehicle body (via a cylindrical roller) when the sliding doors are opened and closed.

The systems guide the door panels into place and ensure that they engage correctly. They are, however, vulnerable to oxidation and wear between door catch and roller. Whence the idea of employing polymer rollers to replace the steel rollers currently deployed. 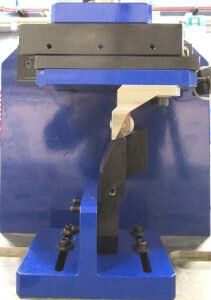 Eurailtest’s partner, the Railway Test Agency (AEF), was commissioned to carry out laboratory tests to establish whether changing the material used for the rollers would reduce wear in the track system caused by repeated train door openings and closures.

The measurements made at the end of the tests on the wear areas in the rollers and catches showed that using polymer rollers clearly limits overall wear in the door opening and closure guide system, thereby enhancing useful life. In addition, the oxidation phenomena encountered with steel rollers no longer arise.

Further tests on the ageing resistance of polymers in an outside environment may also be envisaged.

This type of test is a useful way of optimising rolling stock maintenance by reducing the number parts replacements and lessening regular maintenance downtime in the workshops, while ensuring a high level of in-service reliability.